This morning I headed in to Athlete’s Lounge (AL) to have them check my rear wheel. As I noted in my last blog (Ironman Vineman 70.3 Race Report: Going Flat Out!), I suffered two flats in my rear tube during my half Ironman and these were the 4th and 5th flats I’d had in 2 weeks in this wheel. The last couple of flats I changed, I noticed that the rim tape inside the wheel had folded over and Maddie Oldfield, the Australian pro triathlete who stayed at my house during Rev3 Portland, had been really concerned that this was causing my flats; in fact, she sent me an email about this after reading about my Vineman race on Facebook. Since I hadn’t been able to find anything in my tires, I was pretty sure I was having some sort of malfunction with the wheel itself.

Circled area is rim tape bunched up against valve stem

Boy, did I ever have a problem! I hadn’t messed with the tire at all after the second flat because I wanted AL to be able to see exactly what was happening. The tech removed my tire and started removing my tube until he reached the valve stem where the rim tape was all wrinkled and bunched up so badly against the valve stem that he couldn’t pull the tube out—the valve stem was completely pinched between the tape and the pass hole through the rim! My rim tape was all dry rotted and cracked! He took the wheel to the shop so he could check the tube to confirm this is where they tube failure was and to cut the tube out of the wheel to remove it.

He returned from the shop again saying, “You never would have found this other problem!” The pressure on the tube pulled the nut threaded on the stem to pull through the top hole in the carbon section into the rim. So it was all kinds of screwed up! I’m very glad I made the decision not to take the wheel off and try to change out the tube with the second flat as I probably would’ve had trouble getting it back together and certainly wouldn’t have gotten the old tube out.

Fortunately, none of these things caused any damage to my carbon wheel, which is still less than a year old. Riding the flat did not damage the wheel either and the tire was actually in great shape other than a little split on the sidewall that they super glued together.

To fix the issue, they removed the old rim tape and installed new cloth rim tape, which the tech said he automatically does when he gets new wheels himself as factory tape tends to have these kind of issues. I got a new tube with 60mm long valves so I won’t have to use the thread nut on the valve stem in order to get my tire pump to fit on the stem–no more valve nuts for me! I will bring my front wheel in next time to have the rim tape replaced on it, as I didn’t bring that with me and it certainly will have the same issue.

The best part of the whole trip was having Gary, the shop owner, say that he would’ve done the same thing in that situation—ride the flat the last 12 miles. It meant a lot to have someone with Gary’s triathlon experience confirm that I made the right decision! And totally worth the razzing I got from him about “someone needs some lessons in changing flats!” when I walked in the door! :o)

Before Gatorade, We Drank Switchel

What the Heck Happened??? 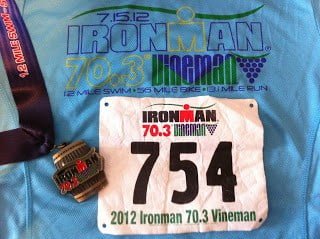 The Hard is What Makes it Great

Pain in the…Park and Other Places!

Gearin’ Up for Twenty Twelve!

Cindy wants you to be Trimazing—three times better than amazing! After improving her health and fitness through plant-based nutrition, losing 60 pounds and becoming an adult-onset athlete, she retired from her 20-year firefighting career to help people just like you. She works with people and organizations so they can reach their health and wellness goals.

She provides health and lifestyle coaching at Trimazing! Health & Lifestyle Coaching. Cindy can be reached at info@trimazing.com.