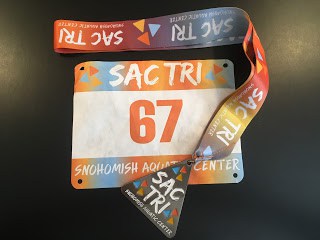 It’s been a long time since I did a triathlon race report! This was my first triathlon since Ironman Tahoe 2012, after which I had health issues that have prevented me from participating in a lot of sport activities that I love. I’ve been feeling really good this winter and had been swimming since my late-December surgery and had started running again after being cleared the beginning of March.

The SAC Tri came across my Facebook page mid-March and it seemed like a great one for me to ease back into triathlon. Like the Beaver Freezer that I’ve done several times at Oregon State University, this tri has a pool swim with an outdoor bike and outdoor run and it was a Sprint distance. It was held at the Snohomish Aquatic Center, a pool I had recently heard of, and it is a phenomenal facility! This was the inaugural event for this triathlon, so that made it even more fun!

The swim started immediately after the race briefing, and for some reason this threw me a little bit. Generally you have about 15 minutes between the briefing and starting, so this made me feel rushed. They had two swimmers per lane, side-by-side, so you didn’t have to try to pass a slower swimmer in your lane. My swim felt good, Alan stood at the side and cheered. Because I felt rushed, I guess, I kept looking at my lap counter ring on my finger, which drove Alan crazy. So I could’ve shaved some time off my swim if I had been more confident in my lap counting!

The pool is a competition pool, so it’s deep to allow swimmers to dive off the starting blocks. They instructed us to pull ourselves out of the pool at the end of our lane when we finished our swim or swim over to the ladder on the side to exit. Well it’s deep and I just decided that being in lane 9 out of 10 it would just be more efficient for me to take a moment to swim to the ladder to get out. I’m glad I did as some people struggled with getting out at the end of the lane.

Being an early season tri and 39 degrees at the start, I had a lot of clothing options set up in transition. But, the sun was out and despite choosing loose things that I could try to put over my wet tri kit, I ended up forgoing most of them. I put on my winter cycling jacket, an under-helmet beanie to keep my wet head warm, but couldn’t get my winter cycling gloves or socks on, so I went sockless and gloveless! But in my exasperation in trying, I forgot to put on my racing glasses, but it turned out okay, thankfully (no bugs, no pollen).

So I haven’t been on my bike since last summer and hadn’t even been in a spin class since my surgery! That being the case, I figured OJ the road bike would be the best choice for this race, and it was so the right decision! My goal was to complete the bike in an hour, and I did exactly that. But my gearing was terrible and I even dropped my chain on a downhill after a short little climb (it totally made me laugh as I got off my bike to fix it)!

My legs and hands were cold during the ride, which I expected since I didn’t put riding pants or gloves on. The legs felt ok after a while and only my thumbs were frozen…

I took the time to sit and put socks on for the run, as I don’t ever run without socks. However, I packed my running socks, not tri socks, so they were a bit of a struggle to put on in a hurry. Oh the things you remember during your first tri back after a six year break! But I did get my racing glasses on for the run this time.

As I hadn’t cycled for a while and it was cold, my legs were like lead during the run. I felt like I was standing still most of the time but my Garmin said I was running a 8:35-9:00 mile, which is too fast for me during the run of my first sprint tri back. I couldn’t regulate my speed at all, so I ended up doing intervals of running  0.2 miles and walking 0.05 miles for most of the run.
About 2.25 miles in I started my walking interval and a runner behind me shouted, “NO! Don’t walk, you’re doing this, RUN!” I know he had the best of intentions, but I was running MY race, knowing my body and what I’d been through the past six years. So I simply shouted back, “I AM doing this!” and he replied, “Yes, you are.” At the time I was a little pissed off about it, but I know he meant well. It was a great reminder to me about how to motivate people and that you don’t always know their story. Just being in this race was a monumental accomplishment for me and took a lot of humility to not be upset for being slow or walking occasionally.

I did it! Back into Triathlon!

What the Heck Happened???

The Hard is What Makes it Great

Pain in the…Park and Other Places!

Gearin’ Up for Twenty Twelve!

Hood to Coast – The Mother of All Relays!

Cindy wants you to be Trimazing—three times better than amazing! After improving her health and fitness through plant-based nutrition, losing 60 pounds and becoming an adult-onset athlete, she retired from her 20-year firefighting career to help people just like you. She works with people and organizations so they can reach their health and wellness goals.

She provides health and lifestyle coaching at Trimazing! Health & Lifestyle Coaching. Cindy can be reached at info@trimazing.com.

Scroll To Top
Listen to Cindy's inspirational Trimazing! story on The Exam Room podcast with Chuck Carroll!   Click for the Podcast